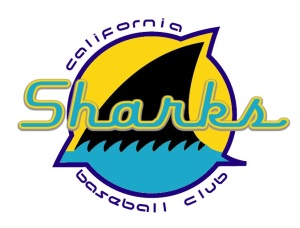 For the California Sharks, it was a good season with a bad finish.  The Sharks rode their way to 95 wins while putting up a strong showing on both sides of the ball, with their pitching staff finally living up to expectations and the batting order looking even stronger than last season.  But their championships dreams were dashed in the Western Division Series, as they fell to the underdog Silver City Outlaws in a tense and thrilling seven-game series.

“It was like having a gorgeous, sumptuous feast laid before you,” said California manager Eduardo Aponte, “then being cut off after the appetizer course.”

The Sharks were in the top three in every offensive category except walks (thanks to Aponte’s aggressive swing-first approach) and stolen bases (why risk getting caught stealing with so many boppers in the lineup?).  In short, California delivered at the plate.

On the mound, where the Sharks were a disappointment last season, thing took a turn for the better.  California finished second in ERA and OPS against, thanks to a staff that used pinpoint control to miss bats (leading the league in strikeouts with 1341 while allowing the second-fewest walks with only 399).  The biggest revelation was 21-year-old righty Kevin Conner, who blossomed overnight from a promising but raw talent into a superstar.  Conner went 19-1 with a 2.82 ERA, 180 strikeouts, and a .610 OPS allowed.  The rest of the rotation (lefties Stu Palmeiro and Matt Simpson and righties Pierre LaRue and Todd Warrant) also produced solid results.

“I’m proud of the fact that our rotation is tough from top to bottom,” said Sharks owner/GM Colin Mills.  “No matter who you’re going against, you’re in for a long day when you play us.”

Finding flaws in this roster is an exercise in picking nits, but there are a few soft spots.  C Thaddeus Lockley hit .256 with little power, a disappointment for him.  Expect youngster Matt Jensen to receive more playing time in 2017 unless Lockley’s numbers improve.  And while California’s pitching staff was overall quite good, they remained surprisingly homer-prone (they allowed 202 longballs, fifth-most in the league.)

The Sharks’ biggest shortcoming, though, is the same as last year: the bullpen.  After a season and a half of underwhelming results, Aponte finally evicted Eugene Grace from the closer’s role.  Rookie Chris Lendon was the replacement, and he didn’t fare too much better.  Another first-year lefty, Bob Orf, struggled in the long-relief role.  Rubber-armed righty Jan Arzola remained the only consistent arm in the Sharks’ relief corps.  A deadline trade for veteran southpaw Olen Abernathy helped a little, but not enough.

If California wants to win a title, they’d do well to add another late-inning arm or two.  Mills called that quest a top priority.  “For our club, those last six or nine outs have been the toughest to get,” said the California owner.  “If we can get one or two more lockdown relievers, we’ll be in good shape.”

The good news for the Sharks is that they’ve established themselves as one of the league’s best teams.  Within that rarefied air, can California take the next step and become champions?

“Our hunger is immense,” said Aponte.  “Everyone in this locker room is focused on a title.  That and winning back the highly prestigious Chum Bucket.  Nothing less will satisfy.”

This site uses Akismet to reduce spam. Learn how your comment data is processed.